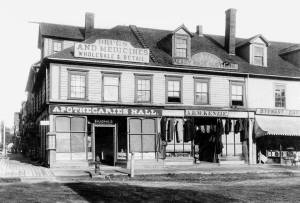 Apothecaries Hall
Courtesy of the City of Charlottetown Collection

Although a beautiful building in its own right, Apothecaries Hall was designated a National Historic Site 8 May 1969. It was recognised for the fact that an apothecary operated on the site from 1810 until 1986.

Thomas DesBrisay opened his apothecary shop there in 1810 and a wood framed building remained on the corner of Queen and Grafton Streets throughout the 19th century.

In 1901, the DesBrisay family hired talented architect, WC Harris to design the lovely brick and stone edifice that we currently know and love at 150 Queen Street.

Although not under the National Historic Site designation, it is hard to think of this site without the pre-1860 gun pointing skyward out front. It was placed there by Theophilus DesBrisay after it had fallen to the water’s edge at the Charlottetown blockhouse. A flagstaff was placed in the bore of the gun, and the Union Jack was displayed for the visit of the Prince of Wales in 1860. It remains a unique commemoration of the first royal visit to Prince Edward Island and a reminder of Charlottetown’s early military fortifications.