Queen Square is the site where the Charlottetown Conference took place; the place where we gather to honour our veterans; where the legislature meets; and people go to see a show or borrow a book. It is all these things and more.

Set aside as early as 1768 when surveyor, Charles Morris laid out the streets of Charlottetown, and later named Queen Square for Queen Charlotte, the wife of King George III by Governor Patterson, it would become the centre of the political, social, judicial and religious life of the Cradle of Confederation. The Square did not start out as the lush green space that it is today. It was dusty on the sunny days and muddy on the rainy days. On market days, people (and their animals) from far and wide entered the Square to sell, buy, and socialize leaving it twice weekly “like a farmyard”. 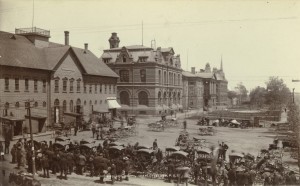 Queen Square from the south on Market Day, Postcard
L-R The Butcher Market, the Cabot Building, Province House and the Law Courts Building
Photo courtesy of the Public Archives and Records Office

The town crier rang his bell and roared the day’s news, while hucksters and patrons bickered and bartered, as did the politicians. A pillory was set up behind the courthouse where the guilty stood while the public hurled insults…and sometimes more.

Meanwhile, the court and the legislature met in a small wooden building, designed by architect, John Plaw and built in 1811. They would remain there until 1847, when the Colonial Building was constructed. Once incorporated, the City Council ran the infant city from the Plaw courthouse, which by then had also been used as a flour and meal market.

This is the Queen Square that the Fathers of Confederation saw when they came to discuss the union of the Provinces in 1864. A bustling, but sparse and treeless space with a wooden round market (built in 1823), a church (built in 1836) and a large stone Colonial Building (Province House).

The delegates attended the market, partied with the locals all over Charlottetown and ended off their stay at a ball at the Colonial Building, where the festivities lasted into the wee hours of the morning. 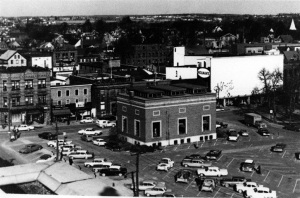 Sometimes fire would strike Queen Square but there was never a bare space for long. Tourist brochures raved about our public gardens where music, the sound of a fountain and the scent of flowers flooded the summer night air. Later, with the advent of the motion picture, the market was where locals took in a movie. 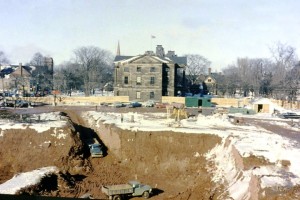 Queen Square, Courtesy of Scott MacDonald author of Charlottetown: Then and Now

As food production and distribution changed, the market became less popular and fewer people came until finally in 1958, it burned down. It was around this time that some people were thinking about how to memorialize the Fathers of Confederation that met at Province House to discuss the creation of our country. Keeping with the spirit of the Square, they settled on a theatre, library, art gallery and restaurant complex that was funded by all Canadians. This was the first time that all provinces agreed to give money for an institution outside their boundaries. A collaborative effort – just like Canadian Confederation – the Confederation Centre opened in 1964. 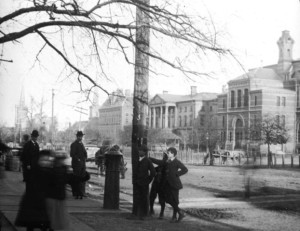 Queen Square from the corner of Grafton and Queen Street, City of Charlottetown Archives

Queen Square has grown and changed from the dusty, treeless place it once was. However, it is still the seat of Government, the place where people gather and meet – whether to socialize, honour, worship or protest. The courts have moved on, as has the market, but as the City has grown, Queen Square has remained the centre of the Cradle of Confederation.