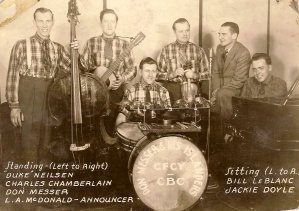 Generations of Canadians can recall the opening line of the song that started every Don Messer’s Jubilee –  ‘Got my dancin’ boots on, got my Sunday best / Goin’ to the Barn Dance tonight….’ In the 1960s, Don Messer’s Jubilee became the most popular television show on the CBC next to Hockey Night in Canada. It began as a radio show on local station, CFCY (and CBC, its affiliate) and then moved to CBC Television where it remained extremely popular right up until its cancellation in 1969, when CBC was attempting to move toward a more youthful look. A storm of protests followed and a resurrection of the show was subsequently attempted on CHCH, a Hamilton station. Sadly, it would not reach the success of the CFCY and CBC days. Don Messer & His Islanders specialized in traditional folk music with plenty of fiddle music and dancing. The photo above features some of the earliest members of the band. Back Row l-r   Duke Neilson, Charles Chamberlain, Don Messer and L.A. MacDonald. Siting l-r Bill Leblanc and Jackie Doyle. The lineup would change and there would be additions to the group, including the popular Marg Osbourne.