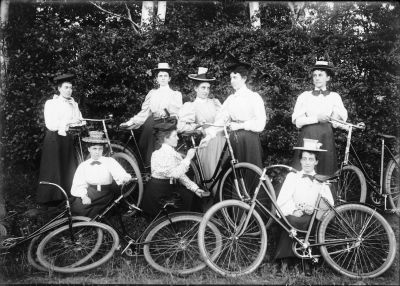 Many historians believe that it was women in particular that benefited from the popularity of the bicycle. Being able to travel further distances, unchaperoned, made women more independent. The bicycle certainly had an impact on fashion. Although the ladies in the photo are not wearing them, specific cycling outfits, with shorter skirts and large bloomers, became popular. Some believe that the ultimate rise in skirt hemlines was because the bicycle chain and the long skirt did not mix well.